The Seine passes through Paris in a lazy arc, a ubiquitous feature of the Parisian landscape. This central waterway shapes the newcomer’s experience: one passes by the river continually in an initial exploration of the city. The river is a busy thoroughfare: house-boats; raw material vessels and official speed boats pass by frequently. The sightseeing boats ferry camera-snapping, finger-pointing tourists between the city’s famous sites. The continual coming and going of these bright, floating barges becomes as repetitious and regular as the river itself. This work is about river as a sightseer's construct – this landmark as seen from the vantage point of a map, from one of the city’s 35 bridges or from the deck of a tour boat. In the video, boats filmed from a Paris bridge float in and out of the split screen frame, creating patterns and mesmerizing shapes from their moving forms. In the accompanying collage, varying cartographic representations - ranging from civic street-maps, to historical reproductions of the city, to hotel location guides - form a long meandering river. In some, the iconic sites of the city are loudly exaggerated, in others the river is the single coloured entity in a monochromatic image. 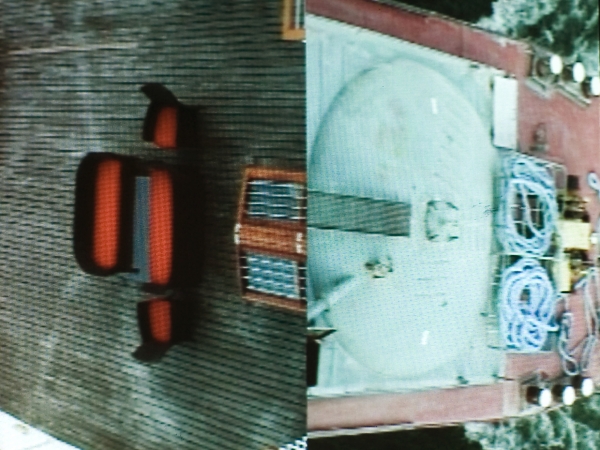