Johannesburg is a city of inconsistency. In the inner city in particular, poor and immigrant communities live (legally and illegally) in impossibly cramped and compromised conditions in derelict apartment blocks. In recent years, the middle class have begun to return to the city, from which they fled with the change in government in 1994. With this return, renovation and development of particular apartment buildings has created larger, open plan living spaces for upper middle class tenants. The proximity between these vastly different living conditions illustrates one of the maim problems facing South Africa, the voluminous gap between the wealthy and the impoverished. August House is one such newly renovated building in Johannesburg. Artists have begun to move in, because the rent is still affordable and the spaces large enough for living and studio spaces. The stark contrast between the quiet spaciousness of the interior of August House, and the surrounding buildings, overcrowded by immigrants and the poor, heightens the experience of both environments. This animation was created from direct drawings onto a window of an August House apartment, and is an attempt to momentarily bridge the divide between these worlds. The animated forms record the actions of people, the structures and objects seen from the window, transporting them into the interior, so that they inhabit the vacuous space. 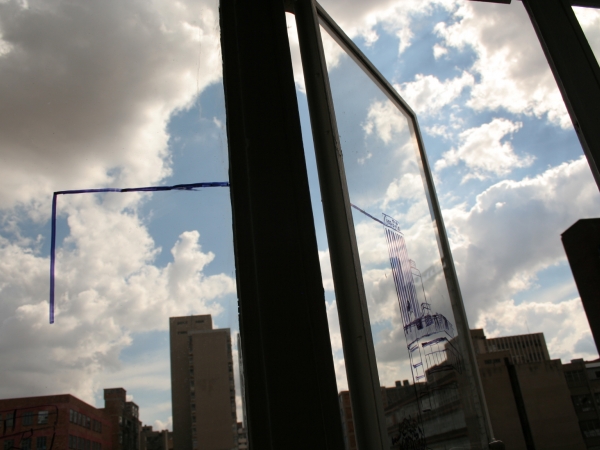